Surrender to the Greater King 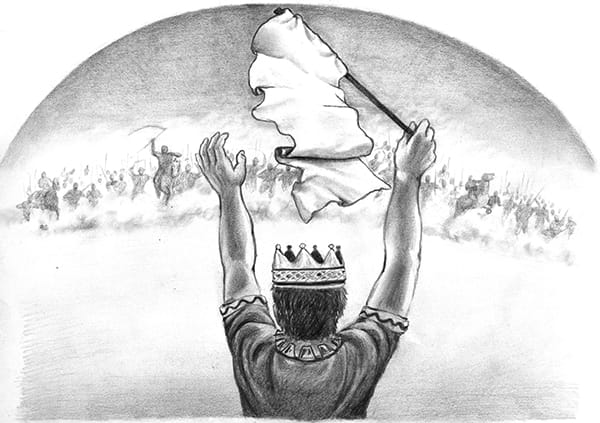 What king, going out to encounter another king in war, will not first sit down and deliberate whether he is able with ten thousand to meet him who comes against him with twenty thousand? And if not, while the other is yet a great way off, he sends a delegation and asks for terms of peace. (Luke 14:31-32)

The Good News is the message of love between God and man. God loves man with such an intense and compelling passion that He could only express it through incarnation. Only through divinity dwelling in humanity could God fully demonstrate His desire to be one with man — His highest and most precious creation. Love was the compelling force that caused the divine Word to leave behind all His divine rights in heaven to come to earth and take up residence in a man. Only in that way could He deal with the enmity that divided Him from those who were made in His very image and likeness.1

What did God see in us that compelled Him to make such a sacrifice?2 It wasn’t as if the sacrifice He made didn’t come at a great cost to Himself, for it was this very thing that the gospel discloses about His true character and heart, which compels us in the same way to make that corresponding sacrifice of our own lives in surrendering all that we are and have to follow in His footsteps. Somehow, underneath all our accumulated layers of hardened callous, there lay a heart which He knew still had the potential of being reunited with Him to accomplish His purpose on earth — even when we were yet His enemies.3

The story of Jonathan and David gives us understanding of the essence of the gospel. Jonathan was the son of Saul, the first king of Israel. As such, he was the rightful heir to the throne, though David was God’s choice to be king in place of Saul. But Jonathan loved David more than his own right to the throne. If we can’t comprehend the gospel in this story, then we can’t be saved. We will never be united with God, for it is through the covenant of Jonathan and David that we can see the heart of Messiah and the heart of a true disciple and what is required of those who follow Him. It contains the very essence of the true gospel.

In 1 Samuel 18:1-4, Jonathan made a covenant with David (who represents Messiah4) because he loved him as himself. Jonathan took off the robe he was wearing and gave it to David, along with his armor and even his sword, bow, and belt. In doing so, Jonathan ratified his covenant with David in an act of total capitulation (surrender) to his coming kingship and kingdom,5 giving himself to David as a servant. This was a sign of his recognition that David was the anointed king.6

Jonathan gave up his kingdom, his sovereignty, to the greater king. He laid down his arms and gave up his possessions — representing his very life. David was to replace Jonathan as heir to the throne, and Jonathan gladly gave David the preeminence. In giving David his robe, he capitulated his own kingdom to the greater king. In giving David his sword, his armor, his bow, and his belt,7 he showed that he was no threat to the authority of the coming king. Jonathan was fully surrendered to David.

David was not a usurper of Saul’s kingdom, but the Spirit of God had come upon him to rule. Samuel had taken the horn of oil and anointed him in the presence of his brothers, and from that day on the Spirit of God came upon David in power. A small circle of witnesses to David’s anointing assured its reality.8

Do you know a coming king who is worthy of unconditional surrender and capitulation, or is Luke 14:31-33 meaningless to you? Do you see the worth of Messiah as Jonathan saw the worth of David? Like the disciples of Yahshua, Jonathan’s loyalty to David extended beyond earthly ties and loyalty to family — father and mother, wife and children, etc.9

Saul gave in to a Satanic impulse to kill David.10 Those who are under Satan’s control do not recognize the Greater King, nor those who are sent from the King.11 But like Jonathan’s covenant with David, the New Covenant in Messiah seals our loyalty and enduring faithfulness to our King. Our only authority to represent Him is the reality of His Spirit working in our midst — the Spirit of love and unity, which is our only witness. Wherever the fruit of love12 and unity is,13 there the Spirit is poured out without measure,14 and there is eternal life.15

There are many degrees of service and love to Jesus in the system of Christianity, but no such degrees existed in the first church. It was all or nothing.16 You either saw His worth or you didn’t. The proof of recognizing His worth was revealed in your obedience to the call to forsake or forfeit family, possessions, your own life — everything you have and are. Whoever accepts these terms of peace17 receives 100 times as much in return for everything he gives up in this life: homes, farms, families, etc., along with persecution, and eternal life in the age to come.18

In the story of Jonathan and David we can see the essence of the gospel, the message of capitulation — absolute and unconditional surrender to the Greater King. Anything short of this response to the message of salvation does not recognize the worth of Messiah.

Many excuse themselves by saying they are only required to have a willing attitude in forsaking these things for His sake. But our Master said in John 7:17 that if anyone is willing to do His will, then he will recognize it and, of course, do it. He won’t reason it away. Our Master doesn’t have to force recognition of His Kingship upon those who truly hate their own lives.19 The gospel’s demands simply expose our innermost heart — what we deem to be of greater worth than Him.

If the gospel you’ve heard did not communicate to your very heart the worth of Messiah, compelling you to give up all to follow Him, then you aren’t saved. If the gospel you heard did communicate that to you, then you will be loving as He loved.20 It takes a 100% sacrificial response on both sides — His side and ours. That is what brings about the establishment of New Testament Community, because we are all on common ground through our common sacrificial response of love for one another. He gave up all — we give up all. In that way we become one in the covenant community of Messiah. That is how His Kingdom can come through the Good News. Is it good news to you?

Yes! Show Me Where People Are Giving 100%
DROP US A NOTE!

Affection Four days earlier, they had chosen their very best male lamb in its first year, in obedience to Moses’…

Yahshua, our Passover Lamb has risen from the dead, proving that his sacrifice for our sins had been accepted by…

It was a hot, sunny day as Andrew walked along the dusty road toward Jerusalem for the Passover. A few…